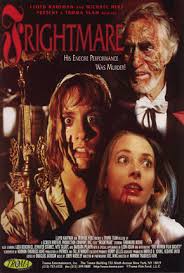 Being a well known film star comes with a power not too many people are aware you have. Conrad Razkoff takes no shit from anybody as he is already in his tenure. He pushes a disgruntled director to his death for criticizing his acting for a commercial. Conrad visits a bunch of students and they get a drama lesson they will never forget. He faints only to be revived by one of the students, Meg. He receives a visit by his bed side by director Wolfgang. Conrad plays dead again and as Wolfgang denounces him, Conrad gets up and suffocates him with a pillow. Conrad dies again. But just like a cat, he has nine lives.

The students sneak into Conrad's tomb and after his coffin explodes, Conrad once again rises from the dead. After Oscar and Donna get kinky, Oscar decides to see what's up only to have Conrad rip his tongue out. Donna gets worried so she too decides to check things out. Conrad sets her ablaze. Bob gets locked up into a trance and gets incapacitated by vapors from inside the crypt. Eve is lured out of her room at the sound of Donna's voice and gets smashed like a pancake by Conrad's coffin. Stu gets decapitated. Meg drives a cross into Conrad's body and Saint gets thrown into the crematorium. Conrad goes back to rest. The psychic bids her farewell to Conrad and attempts to steal the jewelry off his body. Conrad wakes up again and ends up killing her.