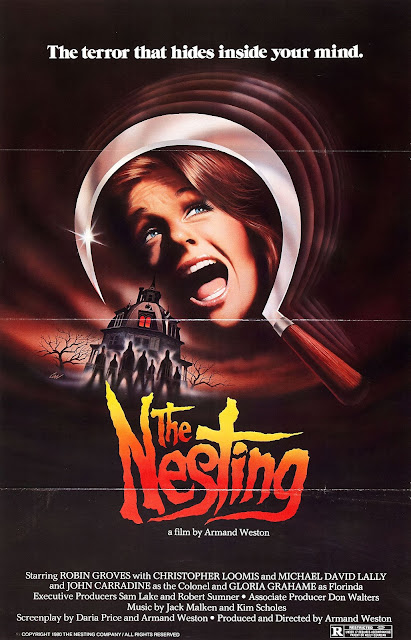 Be very careful what you write about. As a writer, you create life and breathe it in your story and characters.

Agoraphobic novelist Lauren Cochran rents a gorgeous Victorian mansion in the countryside. As beautiful as this mansion is, it is not all what it appears to be. Bizarre events pursue and aggravates Lauren's mental condition further.


Col. Leburn suffers a stroke right in front of Lauren and she begins to have creepy dreams of women occupying the house. She experiences a feeling of deja vu as she realizes that the illustration of the house appears in her novel The Nesting. She then gets locked out while on the ledge of the house and she sees in her own mind that there is a woman inside the house. Dr. Weber, her shrink attempts to save her and falls to his death. Then she gets assaulted by a handyman, Frank in the house. While he is in the midst of his attack on her, he levitates into thin air and then runs away frightened. He sees the corpses of two women lying in his truck and then runs into the woods and gets dragged into the pond and drowns.

Lauren wonders now if this house she is staying in has some actual history. What happened here? Did someone get killed? Was someone trying to send her a message? After asking Abner, a drunk local bad boy, about the house, he attacks her with his pitchfork but by some unseen entity, the pitchfork is taken out of his grasp. Lauren then stabs him to death. Lauren begins to have precognitive nightmares and it is revealed to her that the house itself was once a brothel during World War II. Frank and Abner murdered several prostitutes and soldiers and then dumped their bodies in the pond. In one of Lauren's severe hallucinations, a woman named Florinda comes to her and reveals herself to be her grandmother. As a baby, Lauren was the sole survivor in the house. In the end, she envisions her manuscript burning and Frank's truck collide into the house and burn. She finally snaps back into reality and then leaves the house.